Hergé - The Adventures of Tintin 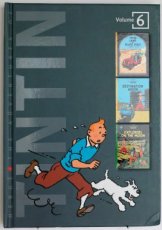 Beschrijving:
Join the world's most famous travelling reporter in three exciting adventures as he heads for the Middle East, discovers a space rocket and heads for the moon. Land of Black Gold Boom! Doctored petrol is blowing up vehicles all around the country. Determined to find the culprits, Tintin heads for the Middle East, but he is in for a nasty shock when he encounters a familiar face in the desert. Destination Moon Tintin and Captain Haddock are amazed to find that Professor Calculus is planning a top-secret project from the Sprodj Atomic Research Centre in Syldavia. And before our intrepid hero knows it, the next stop on this adventure is . . . Space. Explorers on the Moon Following on from the events of Destination Moon, Tintin finds himself in a rocket on a collision course with the moon. And with Snowy the dog, Captain Haddock, Professor Calculus and the Thompson twins aboard, things quickly spiral further and further out of control. Join the most iconic character in comics as he embarks on an extraordinary adventure spanning historical and political events, and thrilling mysteries. Still selling over 100,000 copies every year in the UK and having been adapted for the silver screen by Steven Spielberg and Peter Jackson in 2011, The Adventures of Tintin continue to charm more than 80 years after they first found their way into publication. Since then an estimated 230 million copies have been sold, proving that comic books have the same power to entertain children and adults in the 21st century as they did in the early 20th.