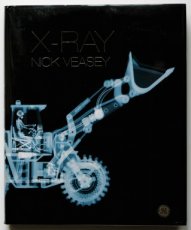 Beschrijving:
Award-winning photographer Nick Veasey uses a variety of specialised imaging equipment to create images that see within. Often collaborating with scientists and boffins, he has built a strong body of work that enables the viewer to appreciate what goes on underneath the surface. The subject matter of these enlightening images is entertaining and wide ranging. X-rays are primarily used for diagnostic radiography and crystallography; they are a form of ionizing radiation and as such can be dangerous.Veasey works in a lead-lined studio which is locked, with him on the outside, during the exposure of the images. Geiger counters are used to ensure safety. Once the x-ray has been exposed on to film it is then scanned at ultra high resolution with special scanning equipment tailored for the process. These digital images are then composed and embellished on computer. The whole process can take weeks, or even months. Often improvising and experimenting, Nick Veasey has created images of the everyday and the bizarre. The contrasting influences of inner strength and outer beauty that these pictures highlight remind us all not to judge by outward appearances.

Nick Veasey is an award-winning photographer, who works with clients from all over the world. His studio is a converted RADAR station on a hill in Kent. Nick has appeared on television in the UK and the USA (on the "Today" show). His x-ray photography has been featured in newspapers around the world, including the Daily Mail and the Daily Record in the UK, the New York Daily News in the USA, and the Adelaide Advertiser and the Sydney Morning Herald in Australia. His work has also been published in the Creative Review, Professional Photographer, Photo Magazine, Time and the British Journal of Photography. He lives in Kent.